So we officially met on his 30th birthday for a cup of coffee at Starbucks. The first time I saw him, he was opening the door for some Asian girl in the coffee shop. I smiled because I realized he probably thought that was me. We had a nice conversation, and he asked me out again for the upcoming Friday. As we were leaving he said, "I won't try to kiss you since you warned me that you might duck if I tried to kiss you on the first date." It was cute, and we had a good time. As Mike put it, "I had a wonderful Birthday, I met this really incredible woman for a two hour cup of coffee ;-)."

I like to think that I was what God gave Mike for his 30th birthday present. 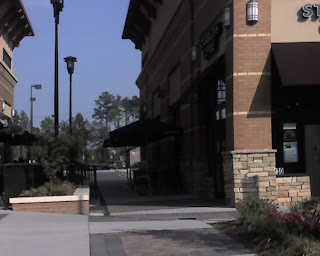 I had been on Match.com for a few years and meet a number of interesting people but never the "one" until one day I received an email from a girl with no profile, just a website stating that we may be way too geeky to be together. This had always been a bad thing in the past, but I decided to check her site out... I'm glad I did. I decided to write back and then call her. Pam sounded perfect, though a little more forward than I was use to... she stated that she actually "ducked kisses on a first date" and actually ended the call with; "are you going to ask me out for coffee or something?"

So we met for coffee on my birthday at a Starbucks by Northlake Mall. I was there a few minutes early and got a tea (because it was afternoon and I did not need the caffeine). So I was looking for an "Asian-looking" girl at Starbucks in Charlotte... what was the chance of another Asian girl to arrive at Starbucks at exactly the same time Pam was suppose to arrive. So I opened the door and asked "Pam?" though she did not exactly look like her picture and she was not Pam... I looked toward the other door and there was Pam, not a good start! I walked over to Pam, who had a questioning look on her face asking; "who was that?" In the end I stated that Pam was a lot cuter than the other girl (which is VERY true). Pam proceeded to buy a mocha and we decided to get some dinner at Moe's.

At Moe's, Pam spilled her drink on herself and I ran to get her napkins. I knew she was a good one. We ate dinner (starting outside and ending inside, because it was cold) and she had to leave early to read to elderly people... very sweet and thoughtful. At the end I asked if she would duck if I tried to kiss her and she laughed. I asked her out for another date and we went our separate ways.

I will always remember that day as the best birthday present ever!

Posted by Pamela Wisniewski at 12:04 AM