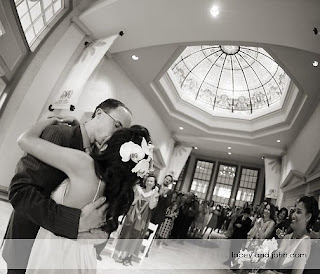 I told Mike even before we were engaged that I wanted to get married on 08/08/08, and that if he wanted to get married at the Daniel Stowe Botanical Gardens (which he has always liked), then we needed to reserve about a year in advance. (I am gutsy, I know!) He thought about it, and he thought some more, and then he decided that we should go for it! So he went to the garden on August 10, 2007 to put down a deposit for the garden. (We got engaged on September 22, 2007).

It is the best botanical garden in the area even though it is still fairly young. They recently built an orchid conservatory which opened to the public this year. Along with the garden, DSBG has a really nice building for events which is where the reception will be held.

Some negative points we have encountered since booking:

-You have to choose out of 4 caterers that work exclusively for the garden.
-The caterers pay a fee to the garden to be a preferred vendor, so this fee may come straight back to the customers (namely us).
-The rate to reserve the garden is pretty high, but it does not include anything other than access to the garden. We still had to pay for catering, decorations, event facility/equipment rentals.
-Management at the garden has recently changed. At first they were going to give us a price break on renting the orchid conservatory, but they will no longer hold up what they told us.
-Reaching anyone in the sales department at the garden is nearly impossible. I think they have so much demand that they really don't have to care about their customers.

The rental company we have to work with is called Creative Solutions. So far, one benefit is that they are very familiar with what is needed for the garden. We haven't had any problems with them.

So, in retrospect, we may have chosen somewhere else for the wedding. However, we still love the garden itself.

Posted by Pamela Wisniewski at 8:37 PM

I am thinking about planning my wedding at this venue! It is truly beautiful but having to choose from only 4 caterers is harsh. Can you tell me what their prices are like? $40 a plate for SidePorch? I would love to get the inside scoop before settling...

Mamma Ricotta's was also very expensive. We decided to go with Karen Warren catering. Dottie, the lady you work with, used to work for the garden so she is an excellent resource as the caterer and just for general planning.

Ah, really...ok. Was Karen Warren Catering priced somewhat modestly I hope!? Thanks for the info!

Yes, Karren Warren was much more reasonable. I can send you more info if you give me your email address (pam@pamspam.com). You also have to think of rental prices for chairs, tables, etc. Truthfully, DSBG is a pricey option. It is beautiful, but if you are on a budget, I would suggest looking into using the state park facilities. They are very inexpensive and still beautiful.