We chose April to do our flowers for the wedding. She actually does silk arrangements instead of real flowers. I liked the idea of having silk flowers to keep as a keepsake. They are also cheaper.

We are going to have phalaenopsis orchids as our wedding flower possibly with bamboo accents. 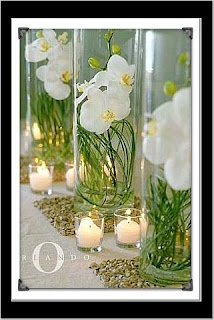 Orchids can impart a wide variety of messages, but historically the meanings of orchids have included wealth, love, and beauty. To the ancient Greeks, orchids suggested virility, and after the rise in popularity of orchid collections in Victorian England, the meaning of orchids moved towards being symbolic of luxury. Orchids have also been believed to carry various healing and protective properties, allowing them to ward off disease. The Aztecs were said to drink a mixture of the vanilla orchid and chocolate to give them power and strength, and the Chinese believe orchids can help cure lung illnesses and coughs.
Today, the meanings of orchids are generally regarded as a symbolic of rare and delicate beauty. Orchids are the most popular houseplant, a top honor they share with the peace lily. Their charm and mystique delight those who receive them, for few other flowers have the ability to impress their recipient in the same way that the orchid can. Among the many different types of flowers available, the orchid holds a special place as one of the most alluring and captivating, making them a special choice for the treasured people in your life. 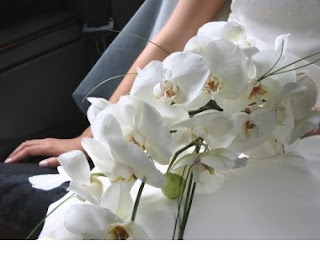 Mike and I both really like orchids. I also like the fact that they have an Asian influence to them. One website I found said that orchids were the Chinese symbol for "many children." As long as "many" means two, we are very cool with that! :-)
Posted by Pamela Wisniewski at 8:20 PM